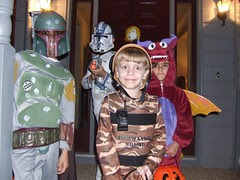 trick or treat
Originally uploaded by Teckelcar
This certainly isn't shocking, but the kids had a great time last night. I did the traditional picture before they went out with their father, then I stayed home on candy distribution detail.

All four came back with a fairly respectable haul and got to enjoy three pieces of candy before heading off to bed. I, on the other hand had a very quiet night.

Just two groups stopped by for a total of four kids. The first two were brothers dressed as spider man and an adorable little dragon. The dragon (just barely two by my guess) was having a hard time with he whole candy thing. He insisted on clutching his treats and didn't understand that if he put the treats in his bag he could have more than one piece. I ended up stuffing a generous handful into his bag.

The other half of our crowd, brother and sister, had actually been sent over by my husband. The oldest, dressed in black robes, is a friend of Jake's and his little sister was dressed as a cute little devil in red. They had met up with my crew and my husband they had to stop by our house. Their mom was seriously impressed by the pumpkins and said "Now I know what you are doing with your spare time now that all the kids are in school." 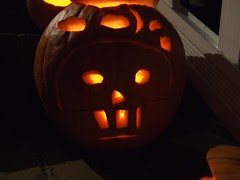 Nate's skull
Originally uploaded by Teckelcar
Then that was it for me. I wish our neighbors participated or that we were on the main drag. Ah well, this just means more candy for me and I don't have to buy any more to fill Nate's pinata weekend after next.

Oh and if your interested, if you click on the pumpkin here it will lead you to the Flickr set of all of our pumpkins in their lit glory.
Posted by Sarah at 11:47 PM