Artist of the Week: Aircraft Carrier 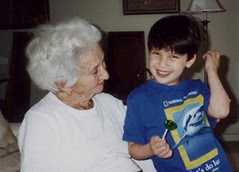 Great Grandma and Jake
Originally uploaded by Teckelcar
This week's artist is Jake, pictured here with his Great Grandma.

If I remember correctly this was taken in 2003 during Passover. It was a big deal for us to struggle down to Florida, but it was well worth the effort. Unfortunately she passed away not long after, but she got to meet all four of her American great grandchildren (the rest all live in Europe).

Jake has clear memories of visiting his Grandmother, Nate has some dim ones, and Max and Rebecca have essentially none (however they love the pictures we took of them with her and do recognize her).

Aircraft carrier
Originally uploaded by Teckelcar
I love this picture, Jake is oh so cute and you can see the affection between the two of them.

Anyhoo, this post is about an aircraft carrier, specifically one built by Jake with Legos. He made it quite awhile ago and it has been parked in his room (much to the annoyance of his siblings). Without any help he was able to envision what he wanted and build it from scratch. 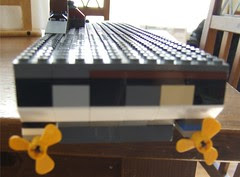 flight deck
Originally uploaded by Teckelcar
Nate had been bugging his brother to disassemble it and free up a large number of Legos. So we decided that I would take some pictures and then the ship would be taken apart.

It really was a very impressive creation. From the offset integrated island to the twin drive screws in the stern. Even Nate grudgingly admitted he like it once he got over his resentment over the number of Legos that had been used by Jake.

It's always interesting to see what they'll come up wiuth next.
Posted by Sarah at 11:47 PM