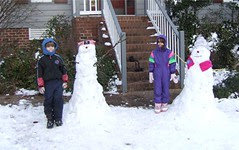 All we had today was a two hour delay. So for four hours they were gone baby, gone!

It got up to the mid fifties and most of the now is gone, except our two snow people. And I have to say snow people because Rebecca wanted a snow lady and Max made a snow pirate. We made them yesterday afternoon because dagnabbit with this much snow we need to have snowmen.

It was a bit tricky because we had waited a bit too long, but we got creative. The traditional rolling snowballs did not work. Instead we used the big chunks of snow and ice created by the road grader. The end result was overall pretty good.

It'll be fun to see how long they will last in the 70 degree weather predicted this weekend.
Posted by Sarah at 6:12 PM