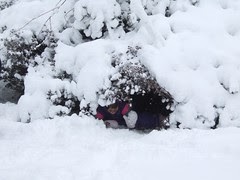 playing in the snow
Originally uploaded by Teckelcar
We ended up with just over eight inches of snow.

The kids got to celebrate with homemade cinnamon rolls this morning before they tumbled outside. The thick white blanket weighed heavily on our trees and bushes. One fun side effect was the impromptu cave formed by the bent over branches on one bush. All four (along with two dogs!) could fit inside. You can just see Rebecca's little face peeking out as she waves to the camera.

Max and Rebecca only lasted about an hour, although Max swore he was out for about two and half hours. Jake and Nate were happily outside all morning long. They only came inside when they wanted lunch. 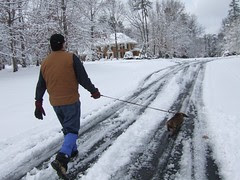 dog walk
Originally uploaded by Teckelcar
In the afternoon Larry and I went out for a walk with the dogs.

The snow was a bit deep for the dogs, so we decided to forgo our usual route on the fire trails through the forest. Instead, we stuck to the roads around the house. As you can see the roads are unplowed, which really was not a big deal during our walk. The dogs had no problem trotting through the slush.

However, with the big freeze tonight, the roads will be hideous tomorrow. I really hate how it takes VDOT a day and a half after the end of a snow event to get to our neighborhood.

So instead, I'll think about how cute the dogs looked running about in the front yard.

I chucked some kibble into the snow to get them to move off the pathway. It always brings a smile to my face when I see them porpoising through the snow with tails wagging. 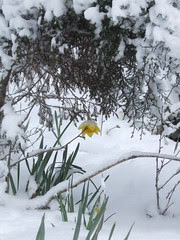 hidden treasure
Originally uploaded by Teckelcar
As for this picture...

I thought it would be a nice spark of color and you would get to see that at least one of our daffodils survived.

The little cedar got bent over by the snowfall and happened to shelter the bloom. If you look closely you can see that the flower head too is also bent from its much smaller load of snow.

I couldn't find the flower I photographed Friday, it lies buried beneath the now. But come this weekend I'll be seeing more daffodils when all of the snow melts away.

However until then, I'll enjoy the sparkling beauty of our foray into winter.

Oh and the kids, they get another day off because of the bang-up job VDOT has done to clear the roads.
Posted by Sarah at 11:05 PM