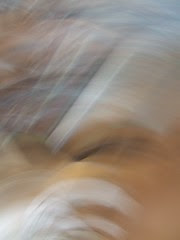 Nate's picture
Originally uploaded by Teckelcar
The one thing I really love about digital cameras is that I no longer have to restrict myself or my children. We can take tons of pictures of anything that strikes our fancy.

For the most part we get some decent pictures and toss the truly terrible. Only the best get printed out.

But every now and then we get something utterly bizarre that is too good to toss. This picture is a good example. Nate was shooting pictures of the dogs wrestling. Most of them were blurry, but still recognizable. It was a case of a very active boy taking pictures of two very active dogs in low lighting conditions.

I deleted a handful and then I found this one. Nate was amazed and didn't believe me when I told him it was his. He had absolutely no idea what had happened of what he had been trying to photograph. I think the brown bit is a dachshund's flank, possibly be John. The rtest is a mystery.

We all thought it was pretty cool and that I should share it with the internets.
Posted by Sarah at 9:32 PM