Now This is Snow 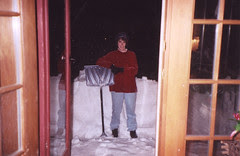 big snow
Originally uploaded by Teckelcar
The news tonight was all in a tizzy over some predicted winter weather that should hit tonight and tomorrow. At most we'll get a trace amount of snow and more likely sleet.

There is in no way the same hysteria as with our last weather event, which admittedly was impressive for this area, but come on.

The picture I have here is from my mom's about 6 years ago. We got 3 feet of snow on Christmas eve. Talk about your white Xmas. It was a beautiful thing to watch the snow come down. My job was to keep the deck clear. I'm standing on the edge of the deck, right before the five or so steps down to the backyard. I had shoveled the snow off the deck and beyond the steps so you can see it really was a boat load of snow.

The amazing thing was we expected to be snowed in for a few days, but 24 hours later we were plowed out. Now that's is some serious snow removal.
Posted by Sarah at 11:59 PM