Artist of the Week: A Bat Story 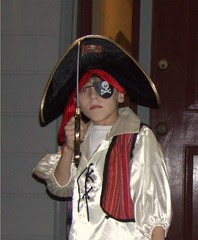 It is amazing how fierce a cute little guy like Max can look. I really need to take more pictures of him in his pirate costume, he loves it so very, very much. I'm glad he is able to step beyond is Star Wars and army man obsessions.

nyway, before Halloween his class had an assignment to write a story about either a pumpkin or a bat. They got to stamp the image on a sheet of paper and then they had to do a short description and/or story.

He even went as far as added lines to the page so that he could neatly write his story. The spelling and grammar are a bit wonky, but that is not the point. The teachers want to get the kids about writing, the nuts and bolts come later in the year.

So here it is: 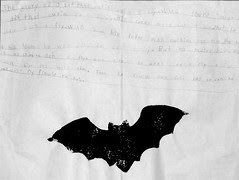 And here it is in a slightly easier to read form:

It was by far the longest and most complex story of the bunch. Max's handwriting has come a long way from just last year. Yes, the spelling is very creative, but so is the story. Max is turning out to be a good little story teller.
Posted by Sarah at 11:34 PM