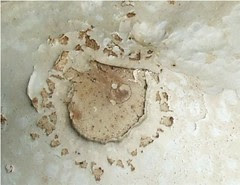 mushroom closeup
Originally uploaded by Teckelcar
We get some strange looking mushrooms in our backyard. This one popped up last January. It was large and looked so very odd I took a picture and promptly forgot all about it.

I was browsing some of my older pictures today when it caught my eye.

I started to play with a bit and found if a did an extreme closeup it looked a bit like an alien landscape. For comparison check out these wonderful pictures of the planet Mars. Those pictures were taken by NASA's Mars Reconnaissance Orbiter using its High Resolution Imaging Science Experiment camera.

The pictures are breathtaking in their detail. Number12 in the series is the one that sprang to mind as I played with my picture. I'm not saying it is a dead ringer, but it is evocative. Either way go and enjoy these glimpses of another world.
Posted by Sarah at 11:57 PM