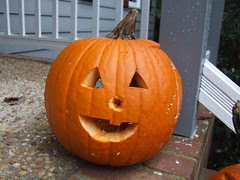 Rebecca's happy
Originally uploaded by Teckelcar
I didn't mention this yesterday, but we had a bit of drama with the pumpkin carving.

Rebecca's first pumpkin was the one she choose to have a happy face. She carefully drew the design and was very pleased with how I carved it out for her. Once it was done I told her to set the pumpkin out on the front steps and fetch another one.

We thought nothing of it until about half hour later Rebecca went outside with another pumpkin. She came back devastated. Dell had decided to have a little pumpkin snack and completely destroyed the face of her pumpkin. 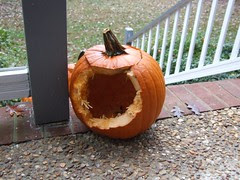 Dachshund + pumpkin = sadness
Originally uploaded by Teckelcar
She sat on the bench howling over the tragic loss of her pumpkin.

I went out to survey the damage and I have to admit it was pretty darn impressive. Dell had very neatly devoured the entire face of the pumpkin, yet he left the lid completely intact. It was bad, but the pumpkin itself was salvageable.

I just turned the pumpkin to the opposite side and replicated Rebecca's original design. It was a fairly good match, in fact it was good enough to calm Rebecca down.

The big thing we learned was that dachshunds + pumpkins = much sadness.
Posted by Sarah at 10:55 PM