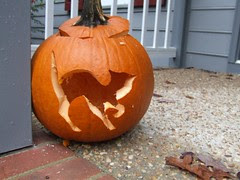 Rebecca's cat
Originally uploaded by Teckelcar
Yes, I really did carve all 18 pumpkins and I have the pictures to prove it.

I was a bit off my pace this year, I didn't quite get all the pumpkins done before sundown. It is usually a close thing, but I make it. For the first time ever I cut my hand and that threw me off. I had to keep stopping because the band aides kept sliding off from the pumpkin slime until I finally got the bright idea to wear a dish glove on the injured hand. Then it was smooth sailing.

This year Nate wasn't all that into the Halloween thing. He decided against trick or treating because he wanted to wear a super scary outfit, but he didn't want to traumatize Max. So he ended up staying home with his older brother and Aunt Meryl (who stopped by). This lack of interest also extended to the pumpkin carving. Previous years he was an active participate, this year not so much. He only made one request, a spider and he left the design completely up to me. 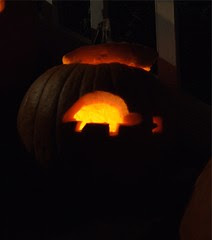 Max's Turtle Eating a Sandwich
Originally uploaded by Teckelcar
As for the rest of the crowd, they were more than happy to tell me what to do with the pumpkins.

Jake designed all four of his and left the cutting to me. He is really getting in to the whole design phase. No longer does he want a perfect pumpkin, he has learned the joys of the warty and the strange.

Rebecca, on the other hand, still wants perfect pumpkins. She takes great pains to get just the right pumpkin and carefully draws her design. She did four of her three. It would have been all four, but her cat was far too tiny and I proposed doing that my self.

Then there is Max.

Foe weeks he has been telling me that he wanted a bat, a penguin and a turtle eating a sandwich. The first was fine, a nice traditional Halloween design. But from there they ideas get increasingly bizarre. Penguins and turtles are his two favorite animals, so there were no surprises there. It was the "eating a sandwich" part that got me. I got exasperated and asked him to draw me a picture of exactly what he meant and well in the end that's what I carved. The ant was a last minute addition and I have no idea where that came from.

So in the end eighteen pumpkins resulted in three bags of pumpkin guts to be dumped in the woods for the deer, six band aides, a ton of pumpkin seeds for roasting, and a whole lot of fun. If you want to see all the pumpkins you can click on the pictures and check out the photosets over on Flickr.