Artist of the Week: Out of the Blue 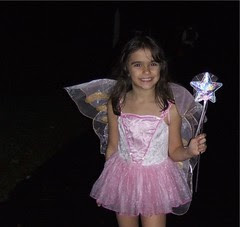 Rebecca
Originally uploaded by Teckelcar
Rebecca is this week's artist with something a bit out of the ordinary for her.

Her Halloween costume, however, was completely in character. She opted to be a fairy princess this year. For over a month she had been planning out what she was going to wear. She has a pretty little tutu from Grandma and she decided to pair it with a set of wings and a wand. For the past few weeks we had combed the internet for wings, but the shipping costs were often more than the cost of the wings. In the end we went to Target and got a gorgeous set of gossamer pink wings. They looked lovely with her tutu and were a bargain and a half and had a nice matching wand to boot.

Originally we had planned on her wearing a long sleeved white turtle neck beneath and white tights, but that proved unnecessary on All Hallows Eve. It was a balmy mid-seventies outside with a nearly full moon. A far cry from previous years that were cold and nasty. 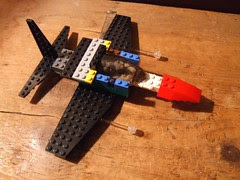 Rebecca's jet
Originally uploaded by Teckelcar
Anyhoodle, this is about what Rebecca did earlier this week.

Her brothers have a long established tradition of fashioning all sorts of vehicles from LEGOs. Rebecca normally looks on and admires her brothers' creations. But not any more, she has stepped up and knocked one out of the park.

I think we were in Max and Nate's room corralling up the mess therein. She came in to show off her fighter jet. I can safely saw we were all impressed. She really did do a bang up job. I particularly like the little puppy pilot under the cockpit's canopy. She got all the details right from the nose, to the wings, and on back to the tail assembly.

Pretty amazing for somebody that never really expressed interest in jets before.
Posted by Sarah at 11:54 PM