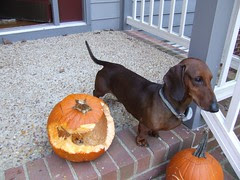 On alert
Originally uploaded by Teckelcar
I mentioned a few days ago that dachshunds + pumpkins = sadness.

Well the boys were at it again.

I looked out the front door and saw that a pumpkin had been dragged over with a significant chunk taken out. Halloween is over and I really don't care, except it is the same beleaguered pumpkin, Miss Rebecca will not be pleased. Although, I will note, the dogs at least had the courtesy to not chew off the face. 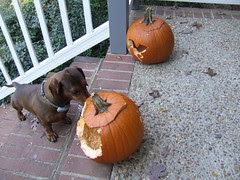 caught in the act
Originally uploaded by Teckelcar
Dell was all excited when I came out to photograph the destruction. He spent most of the time swirling about my feet in a pumpkin induced madness. Eating pumpkin seems to jack him up to new levels of crazy dog energy. Candy, on the other hand, has no effect on him. But then, something grabbed his attention and he snapped into the perfect pose.

John, meanwhile, saw that the buffet was still open and took out a few more bites.

Silly dogs, at least they are eating something good for them.
Posted by Sarah at 1:45 PM