Artist of the Week: Day of the Dead 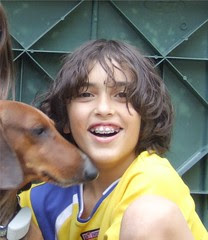 Nate
Originally uploaded by Teckelcar
This week's artist is Nate, who has some seriously long hair now.

I loved how he used to look with a short, little boy haircut. But, those days are long over. He wants his hair long and that's that. I don't really mind the long hair, I just want him to take care of it and to be able to see. So we have reached a compromise, I may periodically trim his hair to keep it out of his eyes and to a mutually agreeable length in back.

The end result is what I call a Prince Valiant. But not really, since the Prince Valiant of the comic has more of what I would call a bob than anything else. Nate's has a bit more style with his long curly locks. There is one version, however, that is a bit more like Nate's hair. The Legend of Prince Valiant from the early 1990's is pretty much what I'm thinking of (Oh and look- Tim Curry is Sir Gawain!) 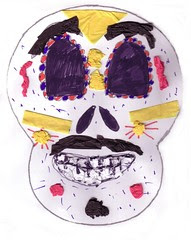 Day of the Dead
Originally uploaded by Teckelcar
Anyhoodle, enough about the hair.

Instead lets focus on Nate's skull instead.

He brought this fellow home a couple of weeks ago. It was made in art class in honor of Día de los Muertos aka The Day of the Dead. A rather fascinating holiday from Mexico that originally was celebrated in August, but had been moved (mostly by the conquering Spaniards) so it coincided with All Saints' Day and All Souls' Day.

The calaveras are often whimsical depictions of skeletons/skulls. I like Nate's version very much. It has splashes of vibrant color adorning the skull and it is a very happy creation, just as it should be. Día de los Muertos is a celebration.
Posted by Sarah at 10:10 PM