birthday in motion
Originally uploaded by Teckelcar
Friday we had Nate's birthday party at the local laser tag facility. Nate got to invite a bunch of his friends and then spend the evening trying to shot them all up. Which, from the eleven year old boy perspective, is an awesome thing to do.

As is often the case, I have very few pictures of Nate that are not blurred by his constant motion. I like the one featured here because you can see the grin plastered all over his face. Even though his laser gun died halfway through the first of two games, he still had a fabulous time. Fortunately he wasn't stuck with the same gun and was able to come in second during the next game. 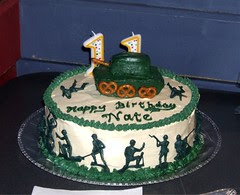 tank cake
Originally uploaded by Teckelcar
As for the cake, I'm very pleased on how it came out.

Nate wanted a plain cake with vanilla frosting. His only decorating request was that he would like to have a three dimension tank on top. I asked him if he wanted soldiers as well . He was delighted with the idea and said yes he would like my soldiers to make an appearance. (and yes I did say my soldiers, I have my very own set that is kept safe and is only used for cake decorating).

After a bit of thought I agreed to the task and this is what I made. It took three cupcakes (leftovers from Wednesday's cupcake drop off at school on his actual birthday), seven pretzels, and a whole lot of frosting. With careful carving of the cupcakes I was able to fashion a cute little tank. I think the best part is the wheels. I was originally planning on just drawing them on, but I got a great idea as I looked for a pretzel stick for the tank's gun. I could use the mini-twists are were in the same snack bag as the pretzel stick to represent the wheels and tank treads.

Nate loved the cake and his friends were pretty darn impressed.
Posted by Sarah at 11:55 PM