Alfajores
Originally uploaded by Teckelcar
A tad over a week ago I made the most outrageously delicious cookie.

Nate's class was having a fiesta in lieu of Spanish class. The students were all assigned a Spanish speaking country and were requested to bring in a food commonly associated with the assigned county. Nate got Argentina, which immediately brought to mind beef.

However I decided I would rather bake something and settled on Alfajores, a short bread sandwich filled with dulce de leche. It sounded delicious and easy to make. A win-win situation for me. 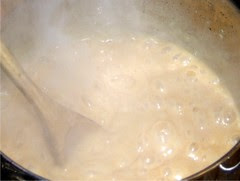 bold boil
Originally uploaded by Teckelcar
I did a bit of research on recipes and picked one featured on Nibbledish. It seemed to be the most straight forward and featured some of the best cooking directions I have ever read. I mean who wouldn't want to try out something that has:

Or even better about ingredients:

1 can condensed milk (NOT fat-free - that's for pansies)

But those pale in comparasion to the following directions:

And guess what, the whole thing worked. The cookies came out absolutely divine. Mr. Aaron R. Johnson, my hat is off to you.
Posted by Sarah at 11:50 PM