Artist of the Week: Dominoes and Cards 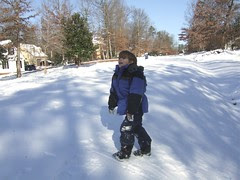 unplowed street
Originally uploaded by Teckelcar
Max is this week's artist and what he loves to do is perfect for those cold wintry days when you really don't want to venture outside.

Although the snow is all gone, this wintry scene is still very relevant for this artist of the week's profile picture. A few weeks ago we got a lovely dumping of snow and we may get some more in the near future. Hopefully the snow will last for longer than a day like the last storm, it'll be minimally disruptive, and the kids will get to enjoy the snow for a bit.

But I'm not holding my breath. 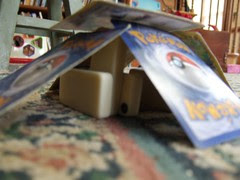 Cards and dominos
Originally uploaded by Teckelcar
Anyhoodle, Max is a builder just like his brothers. Anything is fair game in their eyes to create their varied structures. Max is particularly enamored right now with our dominoes.

Sometimes he'll incorporate his Pokemon cards in his structures. This one was particularly clever in its use of the two types of materials.

Building with cards is a daunting task even in the best of conditions. Our household makes it even more challenging. Between inquisitive dachshunds and loud siblings careening about it is well nigh impossible to build with just cards. Max circumvented this by using dominoes as the underpinnings. The cards were carefully laid on top, completely obscuring the dominoes. 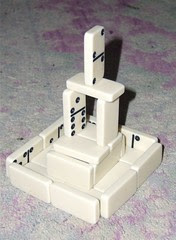 tower of dominos
Originally uploaded by Teckelcar
The second structure featured here is a straight forward domino tower. I know I have featured these before, but Max was so very proud of his creation. It does take a bit of finesse to use these rather slippery tiles, so I think his pride is well justified.

Like his brothers, Max takes into account the visual impact of the finished tower. He likes a clean look, so he turned the dominoes so that the plain backside is exposed. Only on the top are you allowed to get a full view of he dots and that one was carefully chosen to be a double.

With both structures he asked me repeatedly to photograph his structures. He even double checked with me before breaking them down. He is a very careful and meticulous child when so motivated. He is becoming quite a builder. It is nice that he has something he can do with his brothers who in turn appreciate his efforts.
Posted by Sarah at 11:57 PM