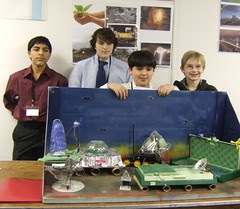 The Boys of The City of Innovation
Originally uploaded by Teckelcar
Saturday was the big Hampton Roads Regional Competition for the National Engineers Week Future Cities Competition. Mind you, we are not particularly close to Hampton Roads, but our school district was lumped in with them.

I picked up the model Thursday and spent the rest of the day and Friday driving around with and enormous display filling the back half of the van. On Saturday we got up well before dawn and hit the road at just past 5:30 am. It was not a particularly fun drive, but traffic was light and we got there just at 7:30, half an hour before the start of registration.

We sat in the car eating bananas while we waited for the rest of the team and the teacher to arrive. They came in dribs and drabs and were all accounted for for when the doors officially opened. 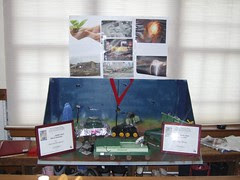 City of Innovation
Originally uploaded by Teckelcar
Originally 27 or so teams were entered, but 7 dropped out at the last minute. At 20 teams it was still a big entry and the boys were all keyed up. They did a good job during the individual judging and then we had to wait. It seems to take forever for the two panels to discuss the entries and make their decisions. When it was time we all crowed into the main exhibition room for the verdict.

There were quite a few individual awards- most futuristic, best water management and so on. Our team garnered the award for Sustainable Food System. Then it was time for the big one. The final scores for determining first through third was a combination of the essay score, the computer model and the scale model. First place would get the honor of representing the Hampton Roads Region at the National competition in DC next month.

Third place was announced, that team collected its prizes and filed out for pictures. Second place was then called out and it was the City of Innovation! The boys were thrilled to death. They didn't get first and the trip to DC, but none the less it was quite an achievement. I was so happy that they had placed. They had done a great job and had worked well together during their presentation. It had been well worth the long drive before the crack of dawn.
Posted by Sarah at 11:49 PM