And Snow It Did

Well the snow hit right on schedule Friday night. I was able to stock up the house and squeeze in Friday night services before the sky started falling.

Saturday morning started out with early morning phone calls. The first one was from a friend checking to see if I was still going to the dog show. I had entered Dell and she had entered her dog. Since only three boys were entered and we were pretty sure dog number three was going to be a no show she wanted to know the scoop. If I didn't go there was no point (literally, there has to be competition for dogs to win points). I told her that I had arranged for Meryl (has Jeep and will drive) to take me to the show. As far as I could tell we were going.

Not fifteen minutes later it was Meryl telling me when she would be arriving to pick Dell and I up. I told her I would be ready with dog in hand. I had plenty of time and got up, dressed and fed the kids. Dell was quickly packed and we were ready to go when Meryl pulled into our drive.

She said the roads were not to bad so we loaded up the Jeep and were soon on her way. In the 15-20 minute turn around the roads went decidedly south. The main road my subdivision was off of had become very treacherous. Even with four wheel drive we slid and fishtailed down the road.

We pressed on with the thought that if 95 was bad we would just head back home.

We didn't even get that far.

After 6 miles of horrendous driving that took nearly 45 minutes we bagged the whole idea. The roads were getting worse, not better and it was not worth going into a ditch just for a dog show. So we headed back to my house with a little side trip for a few more supplies at the supermarket that was on the way home. 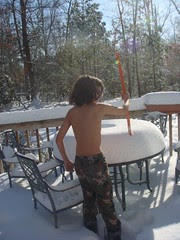 Nate in snow
Originally uploaded by Teckelcar
The snow kept coming down and Meryl, wisely, decided to stay over.

Today the weather was glorious. Nate insisted on going outside this morning in just boots and pajama bottoms to check out the snow. We gave him the yardstick and he measured out 8 1/2 inches of snow.

The rest of the day was spent shoveling for the adults and goofing off in the snow for the kids. Thankfully Nate decided to get properly dressed for his snow adventures later in the day which included things like biking on the road and being buried in the snow.

There will be no school tomorrow and I'm pretty sure they'll cancel Tuesday as well.
Posted by Sarah at 11:43 PM