Boy in a Box 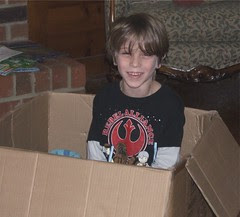 boy in a box
Originally uploaded by Teckelcar
There is an old joke how kids always seem to like the box the toy came in more than the toy itself.

Well there is a small grain of truth in that statement.

Max loves his drum kit, but... I sometimes think he loves the box it came in just a bit more.

He likes to sit in and watch television. When it's his turn to play on the Wii, he'll be there in his box. He has even dragged it upstairs to sleep in in it, surrounded by his stuffed animals and covered with his second favorite beach towel (his favorite was lost while on vacation- it was all very tragic and completely accidental).

And it all works, except the sleeping. He had to admit after about an hour that although the box is big, but not quite big enough to comfortably sleep inside. 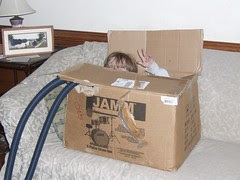 nebulization in a box 2
Originally uploaded by Teckelcar
Then today we had a new wrinkle to the whole boy-in-a-box thing, nebulization.

Max has Cystic Fibrosis and some of the many things we do to keep him healthy are his nebulizations (various medicines are breathed in via an aerosol form) and The Vest. Today Max decided he wanted to do it all in his box with the box on the sofa.

At one point there was a closed box, loudly vibrating, with various tubes leading into it on the sofa. Much to our amusement Max would periodically peek out.

There is never a dull moment around here, especially if you have a boy in a box.
Posted by Sarah at 11:21 PM