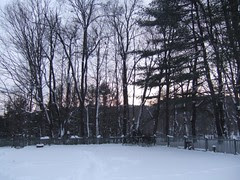 Nana's backyard
Originally uploaded by Teckelcar
It has been a very busy winter break and I'm glad it's drawing to a close.

We have had a broken foot, long drives, a blizzard, lots of family, good food, and fun. Excepting the foot, I wouldn't have traded any of it.

Poor Jake was the one with the bum foot. He was walking about in the kitchen on the eve of our departure, Sunday, when he somehow rolled over the outside of his left foot and fractured the fifth metatarsal. Of course I thought he just sprained it and sent him off to bed with a couple of Ibuprofens. Next morning (Monday) he was still in pain, which is major for him being all stoic and with a high pain threshold.

So many hours and a few x-rays later he was determined to have a 90% chance of a fracture. He was issued crutches and the recommendation to see a orthopedist. With a fair amount of phone calls and a willingness to go to any office in the Richmond metro area we secured an appointment with a foot doc at 8:30 am Tuesday. Not to bad, we only delay by a day and Jake gets properly checked out. The best part was the doc is sort of kind of on the way up North and we would still get an early start.

Tuesday morning the foot doc agreed that it was most likely a fracture. Jake got an Aircast and an appointment for a follow up in January. We were on the road by 10 and had quite possibly the best drive north ever. We missed most of the traffic and had clear sailing.

As for the blizzard, it really wasn't a big deal. Where my mom lives we only got 13 1/2 inches and she was plowed out by 11:20 am. We were planning on heading back down to my inlaws' that day (Monday), but they got 18 inches of the white stuff and a snowdrift again the front door. It was decided that delaying by a day would be the prudent thing to do.

And really that was it. Again we had easy drive. We ate far too much good food, got to see some family and have a good time all around.
Posted by Sarah at 11:58 PM

LOL - "only" thirteen and a half inches! I don't want to say this for fear of rousing the "jinx" fairy, but all these big storms have missed the Milwaukee area. Two hours north, they were dumped on before Christmas. Minneapolis is buried, as was Chicago.

We have bare ground.

So sorry about Jake - and to have such a dull tale to tell about how it happened (says the woman who simply got up from her chair and slipped a disk). Hope it heals quickly.

I fractured my foot once chasing a cockroach. How's that for a distasteful injury?