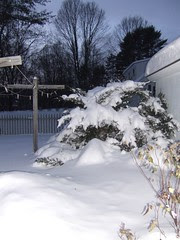 angry snow monster plain
Originally uploaded by Teckelcar
After the blizzard on December 27th was all said and done I took the obligatory post big snowfall pictures around my mom's house. I was enjoying the late dusk light coupled with the downy softness of the snow and not really looking at exactly what I was photographing. I was essentially in the moment.

It wasn't until much later, like days and days later when we were back home, that I really looked at my pictures. I had a few nice ones of my mother's tree that the kids decorated, the snowy backyard, the buried van and a few of the kids tromping about in the snow.

Then one picture stood out.

It was of a bush, branches laden with snow, tucked behind my mother's garage. I didn't notice at the time, but it looked rather like an angry snow monster crouched beside the garage. 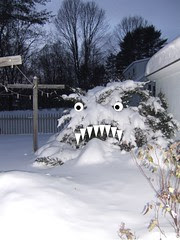 angry snow monster toothy
Originally uploaded by Teckelcar
To give you a better idea of what I see, here is the same picture with the addition of eyes and teeth (I have such mad photoshop skillz).

I think it is uncanny how the bush in the unadorned picture looks so menacing. It's just a normal coniferous bush in the summer, only notable for it's size and prickliness of its needles. But, covered with a bit over a foot of snow, it looks like it's ready to go on a rampage.

If we had been able to stay longer and if I had noticed this while we were up there I would have had the kids make some snow people fleeing in terror from this bushy menace.
Posted by Sarah at 10:55 PM

Truly horrifying. On many levels ;-0