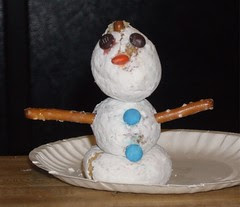 snowman
Originally uploaded by Teckelcar
This Friday Rebecca's class had their postponed winter party. It was to be held the Friday before break, but winter weather caused school to be closed both the last two days of school. Which was a boon for Rebecca because now I could come. She's always grousing about how I don't spend nearly as much time in her class as I do in Max's (there is a small disparity, but that's due to the whole Max needs enzymes when he eats and it makes everything easier when I show up).

Anyhoodle, there were games, I read The Mitten and The Hat to the class, lunch was provided by the parents, and there were a couple of craft projects- a snowman and a bookmark. Of the craft projects the snowman was by far Rebecca's favorite.

And why wouldn't she like the snowman? It is composed of her favorite food, doughnuts. I think it is a very clever idea. Three doughnut holes held together with pretzel sticks with M&Ms making up the eyes, nose, and buttons. Of course being a room full of nine year olds there was much commenting about the "brain surgery" from the pretzel jammed down the middle. It was a very fun and rather tasty project.
Posted by Sarah at 10:24 PM