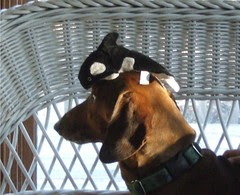 orcahead
Originally uploaded by Teckelcar
John is such a good boy. He puts up with all sorts of nonsense with quiet grace.

Just the other day Nate was on the dog couch with the dogs and found a little stuffed orca nearby. Being 12 years old, Nate promptly placed the toy on John's head.

John sat there with his long suffering hound face, calming looking around. The effect was hilarious. Nate begged me to take a picture and I happily complied.

John ultimately tired of his unusual chapeau, but at least I was able to get a picture.
Posted by Sarah at 11:41 PM