Artist of the Week: Dragon! 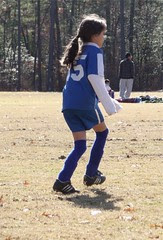 Rebecca, a photo by Teckelcar on Flickr.
This week's artist is Miss. Rebecca. She is such a girlie girl, loves cute little animals, drawing, cooking, and dressing up. Then there is the insanely competitive and stubborn side to her personality. She is a tough little soccer player and never backs down. Rebecca just keeps at it and is not at all afraid of the ball, which makes her a fairly good goalie.

The stubbornness also gets born out in never wanting to be wrong or self contradicting, something I got to see just this morning. Max asked to try out "that stuff Rebecca eats every morning. You know that chocolatey stuff." I was perplexed at first and then I had my ah ha moment, he means Nutella.

Meanwhile Rebecca was deeply offended that Max said she ate Nutella every day. She most clearly did not eat that stuff every day and he was WRONG, WRONG, WRONG. She sat and stewed for a bit and eventually got over her snit. 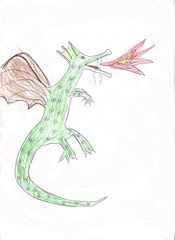 Dragon, a photo by Teckelcar on Flickr.
Sort of, because in the morning Rebecca can be a bit of a dragon.

When things calmed down I asked her what she wanted for breakfast. I was then treated with watching her for five- almost ten minutes trying to figure out what she wanted to eat. Very clearly (at least to me) she wanted to say Nutella on bread, but there was absolutely no way she was going ask for that after her earlier outburst about not eating the stuff everyday. In the end she settled on dry cereal.

Happily she kept her inner dragon in check and did not blast us like this charming fellow she drew a few weeks ago. I think he is a lovely dragon, but I wouldn't want to have an argument with him about breakfast foods. I would end up being extra crispy.