Artist of the Week: Bar Mitzvah 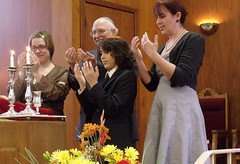 blessing of the candles, a photo by Teckelcar on Flickr.
Last weekend was Nate's 13th birthday and his Bar Mitzvah.

A few years ago Larry calculated when Nate's Bar Mitzvah would be and we were delighted that find it would be 11-11-11. Even better, his actual birthday would be on a Friday. Which is pretty darn cool. In reality the date means nothing, but it does make it memorable.

So for the past few months have been a whirlwind of studying, preparation, and attending services on both Friday night and Saturday morning. 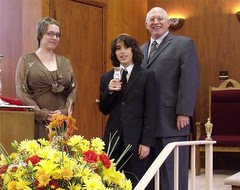 blessings for wine, a photo by Teckelcar on Flickr
For me it was a weird mixture of being easier and harder than Jake's Bar Mitzvah. On one hand it was old hat, since I had already done it before. And yet that made it harder, a few details almost got forgotten. But in the end it all came together.

Nate did a good job, even with the minor mixups with the pianist Friday night. It seemed as though the two of them weren't quite on the same page (sadly the original pianist that played with Jake passed away and we had someone else). It wasn't disastrous and Nate, to his credit, adapted as best he could and didn't lose his cool. Sunday things were a bit smoother and, miracle of miracles, Nate finally slowed down.

I'm very proud of Nate and the dedication he showed while studying. He even wiling gave up sports for the fall season. Nate recognized that he didn't have the time and that inevitably there would be conflicts.
Posted by Sarah at 11:52 PM