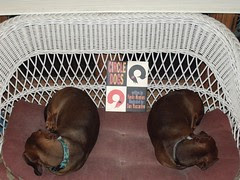 circle dogs, a photo by Teckelcar on Flickr.
Whew, this has been a crazy busy time. Nate had his Bar Mitzvah this weekend (more on this later), thus no post on Friday.

So, he we go with what would have been my traditional Friday post.

This week's MCP Project 52's theme was "Book Title." I originally planned on doing something with a stack of books and their juxtaposed titles, but that idea got tossed when Rebecca causally remarked one day that the red boys were "Circle Dogs" on the couch.

Circle Dogs is a charming picture book that we have has for quite some time. It features a family and their two dachshunds over the course of a day pointing out shapes that can be found in the boldly colored, retro illustrations. The book is wonderful and a dead on description of what a dachshund's day is like.

I had to use that idea that Rebecca had implanted in my mind.

It was no big deal for me to wait for the dogs to assume the "circle dog" position, every night they curl up on the couch. All I had to do was find my copy of the book and place it on the couch with them. They boys were very obliging and I ended up taking a dozen pictures as they shifted their positions over the course of the evening. I picked this shot to submit because the dogs reflect the two dogs on the cover. Which turned out to be a very good choice, for the THIRD time my picture has been selected to be in the MCP Project 52 top ten.