Artist of the Week: Lone Pumpkin 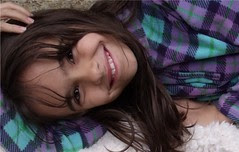 Rebecca, a photo by Teckelcar on Flickr.
This week's artist is Rebecca, who in a small way saved us from a pumpkinless Halloween.

As I mentioned yesterday, I completely failed to get any pumpkins. It was my own fault for waiting until Halloween itself to buy them, but I've been a bit preoccupied by Nate's up coming Bar Mitzvah and figured there would be pumpkins somewhere.

Well I was very, very wrong to assume that there would be any pumpkins left on Halloween. I went to all my usual sources and came up with zip, zero, and zilch. In most cases all evidence of pumpkininess was completely swept away. Only once did I find an empty display rack. It was a very sad thing indeed. I had Meryl help out and we discovered via phone that even a local farm stand could not help me out in my quest for pumpkins. Crushed by inability to find any suitable gourds I dragged myself home. 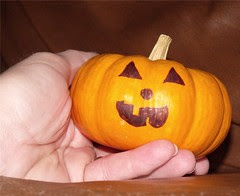 wee little pumpkin, a photo by Teckelcar on Flickr.
Rebecca, as I would have predicted, was the one most disappointed by lack of pumpkins. She stewed around and had it very clear she was not happy with this turn of events. She didn't quite believe the total absence of pumpkins in our county, so I took her out with me to try one more store. In the end I bought three balloons, one orange and two black.

When we got back home Rebecca ran upstairs. A short while later she came back down and asked to use one of my sharpies, in black. It had to be black. I told her to help herself, I kept them by my computer.

A few minutes later she triumphantly presented to me the cutest little wee jack-o-lantern I had ever seen. It was the gourd she won at the county fair and had held onto since the beginning of September. Technically it is not a pumpkin, but it'll do in a pinch. Rebecca had done a lovely job drawing on the gourd and saved us from a pumpkin free Halloween.