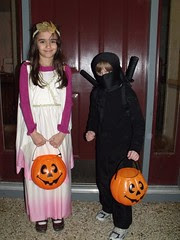 Trick or Treat 2011, a photo by Teckelcar on Flickr.
It was a rather soggy Halloween last night.

The day itself was sunny and mild, but as the day progressed clouds gathered and darken. Then at about 4:30 the first drops of rain fell and from then on it only got worse.

But the real tragedy was the dearth of pumpkins on our front steps.

I had been busy and kept putting off my big pumpkin purchase. I didn't actively start shopping until Monday. At which point, much to my chagrin, there were no more pumpkins to be had.

So there was no massive festival of pumpkin carving for me this year. A disappointment to be sure, but due to the rather foul weather not necessarily a bad thing.

We had only one trick or treater, the little boy next door. Combined with the steady rain all evening that would have extinguished out jack-o-lanterns, all my carving would have been unadmired.

Next year, however, I'll be a bit more on the ball.

That being said, Athena and Black Ninja had a good time being squired about in the van. A bit of a cop out for me, I prefer walking from house to house. However I'm also a realist and it would have been thoroughly unpleasant to to tramp about on such a dismal evening.
Posted by Sarah at 11:13 PM