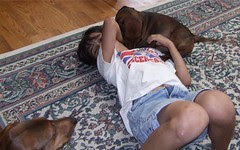 boys
Originally uploaded by Teckelcar
Most non-dachshund people have a hard time telling the red boys apart. To me, and those that know John and Dell, it is fairly easy to tell them apart. Heck, when I pat them in the dark I instantly know which dog it is.

The most striking difference is their size. Both are good sized standards that dwarf the far more common miniature. (A mini is defined as a a full grown dachshund that is a eleven pounds or less. My boys weigh in at 27 and 25 pounds apiece.) John is a fairly robust 27 lbs with thicker, hound-like features. He is of the old fashioned hunting type. Dell is the lighter of the two and has the more elegant type favored today.

Interestingly their personalities do not match their body types. Dell, my elegant dog, is a complete oaf. He bounces around with absolutely no regard for what surrounds him. Today for example Nate was on the floor stretched out next to the sofa. I was happily reading a book while on the sofa. At some point I called over Dell. He dashed over, trampling Nate and then proceeded to bounce all over Nate while I patted him. Nate thought it was hilarious that Dell was oblivious to what he was doing to Nate.

After a bit I got up and let out the dogs. Dell paused for his half brother to reach the deck, then launched himself onto the lawn and careened about. John meanwhile, calmly surveyed the yard and then sedately descended the few steps to the lawn.

Once we wee all back inside Nate asked me why does John always looks out before going down the steps. I thought for a bit and replied that John likes to check out what is going on before he gets involved. Which is true for John in general. Our big red boy is far more aware of what he is doing than Dell. John almost never bounces on Nate. When we repeated the set up we had with Dell (Nate stretched out on the floor by my side), John only stepped on Nate once and that was only because Nate got in his way. John would carefully stretch out above Nate so I could reach him. And then, when he was done, would neatly sit back down without touching Nate. It was amazing to watch the precision of John's movements. Far different from his manically happy half-brother, Dell.

It just goes to show you really can't judge a book by its cover.
Posted by Sarah at 11:54 PM