A Whole Range of Colors 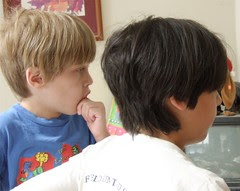 brothers
Originally uploaded by Teckelcar
We have a whole range of hair colors here at Life At Full Volume. If fact you can so the two ends of the spectrum in this picture of Max and Jake.

Max is always been called the blond of the family, in fact he has been called the white sheep by the pediatrician. But except for that ,I tend to forget about the varieties of color offered by the rest of the crew.

Until it's hair cut time.

Yesterday I rounded up the shaggiest of the bunch and gave them haircuts. Rebecca's bangs wee always in her eyes, Jake's face was disappearing under his mop and Max just plain wanted a haircut. Nate got a pass this time because his last hair cut was pretty drastic. The cuts themselves were pretty basic, but it is the aftermath that was very striking. 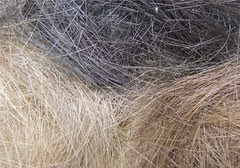 whole range
Originally uploaded by Teckelcar
Jake's hair looks almost black, making Rebecca's seem far lighter than it really is. As for Max, well he still is the blond one. In case I'm not completly clear: Jake's is on the top, Rebecca's hair is the lower right and Max's is the lower left. Nate's, if it was there, would fall between Jake and Rebecca. It is much closer to Jake's color than their sister's.
Posted by Sarah at 6:30 PM