Artist of the Week: CF Patients 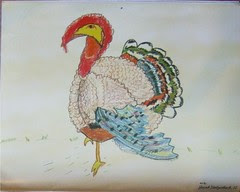 Axcan November
Originally uploaded by Teckelcar
This week the artist of the week is actually a group, Cystic Fibrosis patients. Namely those featured in calendars we've acquired this past year from two of the big drug companies, Axcan and Novartis. Both put out CF themed calendars that are distributed for free at CF clinics.

Axcan's calendar is the result of an annual calendar art contest open to all CF patients. I forgot about the deadline this year, but we'll give it a shot next year.

Anyway the end result is a fairly nice calendar that features art work from kids as young as five all the way up to twenty two. I picked the turkey featured on November because he is so utterly appropriate for today. If you click on the turkey he will take you to a complete photo set of the calendar. 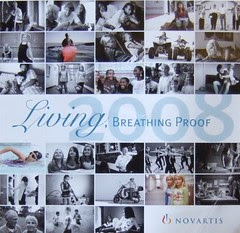 Living, breathing proof cover
Originally uploaded by Teckelcar
The other company, Novartis, has a different take on CF, a CF patient is profiled each month. The photographs are stunning and the bios give a little peek into each person's life. There is a grandma, a firefighter, a set of twins, and so on. People of all ages and types. As a parent of a child with CF it is so very heartening to see people in their 50's and up.

And here is where I get on my soapbox.

CF affects ALL populations, male and female, black and white. It is slightly more prevalent in Caucasians, but if you click through the pictures (I made a picture set out of the entire calendar) it is not the only group. I was appalled at the ridiculous decision by the Carleton University student association. It was an idiotic vote based on incomplete and erroneous information.

Quite a firestorm of controversy was stirred up and according to the latest press releases from the University's President and the Student Association's President the decision will in all likelihood be reversed.
Posted by Sarah at 11:06 PM

Labels: Artist of the week, CF