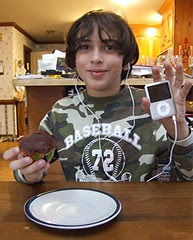 Nate turned ten today and he got to enjoy a cup cake for breakfast and open up his presents. We decided he could do it this morning because he has football practice tonight and he would get almost no time to enjoy his gifts if we waited until after practice. As for his official party, it won't be until December. With football playoffs and a silly holiday called Thanksgiving, we're booked until then.

As you can see he is very pleased with the iPod. He has being bugging us for quite some time about getting his own MP3 player. He has quite a collection of tunes on Larry's computer and was severely limited on when he could listen to his music. Now he is free to listen all the time.

Hopefully he won't lose it like his water bottles (I've lost count and now I refuse to get him another. He is stuck with the huge jug that Larry brings to practice for him.) and his coat.

You are such a fun kid to be around, happy birthday Nate.
Posted by Sarah at 11:34 AM