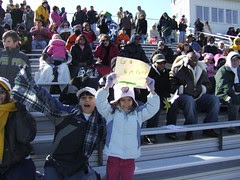 cheering section
Originally uploaded by Teckelcar
It was the championship game on Saturday. The skies were clear, but (for here) it was bitterly cold. The temps struggled to reach the low 40's and a sharp, damp wind cut across the field. It was not the pleasantest of days, but that's football. We were all bundled up and Meryl brought a nice fleece blanket to insulate our bottoms from the metal bleachers.

Before we left for the game Rebecca made a sign to show her support. It was completely her own idea, all I did was help her with spelling. She looked incredibly cute waving her sign and had a great time cheering her brother on. I guess she really will be a cheerleader next year. 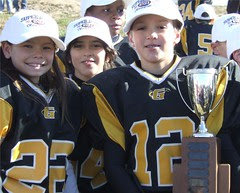 Champions
Originally uploaded by Teckelcar
Any way the game was fun to watch and Nate got a fair amount of time on the field. He was fairly confident going in, his team had already played their opponents during the regular season and had beaten them.

His confidence was not misplaced.

It was not a cake walk, but our team slowly racked up the points. The other team played a good game and was able to score, they even got the extra point. However, it was not enough, our team kept on rolling. When the clock ran down and the ball was in our possession, our side went wild. 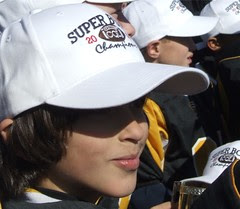 Happy Nate
Originally uploaded by Teckelcar
12-0, that was Nate's team record at the end of the season.

What an introduction to the sport, a championship season his first time playing. That'll be a tough act to follow next year and there will be a next year. The coaching is bit too serious for my tastes (football is a very, very serious thing down here in the south), but Nate had a great time.

I think he'll be smiling for quite some time.
Posted by Sarah at 11:40 PM