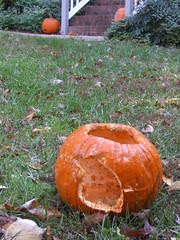 deer food
Originally uploaded by Teckelcar
This is why I carve our pumpkins at most the day before Halloween.

I noticed on Sunday that Max's sea turtle pumpkin had been munched. This was less than two days after I had carved the pumpkin. Another pumpkin had lost its lid the day before.

At this point I wasn't entirely sure what had nailed the pumpkin. It could be the dogs (unlikely due to the absence of doggy teeth marks and the that the pumpkin was otherwise undisturbed), squirrels or deer. All I could see were little nibble marks in the rind around where the design used to be.

It was an annoying sight, but oddly satisfying. Here was concrete proof that I can not do any early pumpkin carving unless I'm willing to keep the finished pumpkins inside. 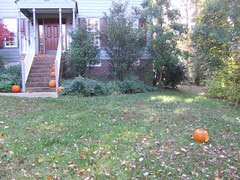 munched pumpkin
Originally uploaded by Teckelcar
A few days later the same pumpkin got dragged off the steps and onto the lawn near the woods. At this point I'm fairly certain that the deer are to blame. Last year I got to see them drag a pumpkin to the very same spot on the lawn. I frequently see them in the woods around there, picking their way through the low scrubby brush.

Tomorrow we'll chuck the pumpkins into the woods. I don't want to wait too much longer, they'll soon start to turn to mush. They are already fairly moldy inside, but they are fun to carve and I'll be doing it again next year.
Posted by Sarah at 11:57 PM