Rebecca
Originally uploaded by Tecke
Last Friday was a very exciting day for Max and Rebecca. In addition to being Halloween, they also got to dress up as their favorite fairy tale character and parade around the school.

They brought home their assignment sheets about a month ago and the sheets stayed pinned to the bulletin board until last Wednesday. The sheet had just a few instructions: the child had to fill out a brief report on which character they represented, a space was provided on the sheet for an illustration of the character and the costume/character could not be Halloween themed. Costumes need not be store bought.

Rebecca's was dead easy. She wanted to use the Cinderella dress Nana bought her about a year ago. The harderest part was finding both of her shoes. You can see how utterly adorable she is in her costume. As for her report, well she is a girl of few words. The reason she gave for selecting Cinderella was that "She was nice." 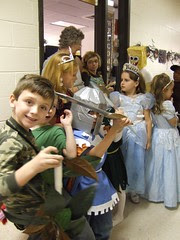 Ready to go
Originally uploaded by Teckelcar
Max was a bit trickier. After a bit of hemming and hawing he decided on being a knight. And he had to be just a knight and not a prince. After a bit of thought I told Max about Saint George and the dragon. Max liked the story, especially the bit about slaying the dragon and saving the kingdom. Now we just had to come up with a costume.

Using some leftover fabric from an old sewing project, cardboard, press-on felt from the store (I just want to add here I heart press-on felt, I could sew it on, but this is much easier) and a whole lot of duct tape we were able to cobble together a decent costume. In fact Max liked it so much he ditched his original Halloween costume, Ironman, for his knight.

I think his favorite part is the sword. As you can see in the following video highlights of the parade, Max loved to swing his sword around. He never hit anybody, but I did bring it home with me after the parade. I figured his teacher didn't need an armed Max in the classroom. 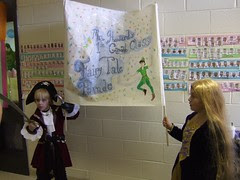 Rebecca's class
Originally uploaded by Teckelcar
The parade started out doors for Max's class and after the transition I caught up with Rebecca's class which was already indoors. Unfortunately her part of the video came out rather dark. But, I did get a good still photo of the classroom banner before the parade started. Captain Hook and Rapunzel got the honor of holding aloft the banner during the parade.

There were quite a few princesses and numerous Captain hooks and Peter Pans. Jack and the beanstalk was another favorite, in fact that was what Jake dressed up as in first grade. I think the most inventive one was a girl not in Max or Rebecca's class dressed as Rapunzel. Here body was encased in a cardboard tower with her head peeking out of a window. A long blonde wig cascaded over her face and down the outside of the tower.

Max's class
Originally uploaded by Teckelcar
After the parade the children returned to their classrooms and had a fairy tale feast. Sadly I missed both of my children's oral presentations, but that is what happens when you have to bounce back and forth between two classrooms. However, I was able to get this nice group photo of Max's class after the feast was over.
Posted by Sarah at 11:56 PM