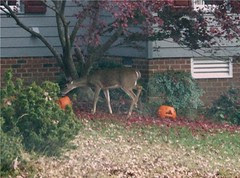 busted
Originally uploaded by Teckelcar
As I was driving up to the garage yesterday I got to see the deer in action.

I slowed down to a crawl and then stopped the car so as to watch four does daintily pick their way among the plantings and enjoy the pumpkin buffet I had so thoughtfully laid out.

Luckily I had my camera in the car and I was able to capture one of the does just before she nibbled on a pumpkin. I missed one really great shot of a deer clearly licking a pumpkin as I fumbled with the camera case.

The picture quality isn't that great, but that's what you get when shooting through a grubby windshield. 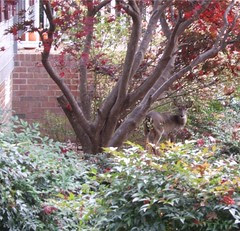 who me
Originally uploaded by Teckelcar
The second picture came out much better. It is of a doe mucking about in the bushes in front of our house. She really wasn't at all bothered by the car or the sound of the garage door. She looked up when I peeked around the corner to take the picture. I think the only reason she left was because the others had already moved into the woods.

Shortly thereafter I carted all the pumpkins down to the far edge of the woods. The deer can now enjoy their buffet without having to go near the house, not that it stopped them.

This why I call them tall rats. They are cute, but they are pests.
Posted by Sarah at 11:55 AM