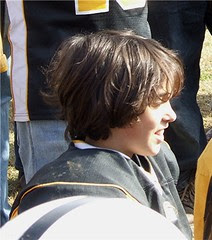 Nate
Originally uploaded by Teckelcar
Saturday Nate's football team played for the Southern Division championship. The team they were up against had also been undefeated in the regular season, this would not be a cake walk.

It was an incredible game.

The teams were evenly matched. Both teams had one blazingly fast player. Our team had a slight edge in defense, but not by much. The teams remained scoreless for most of the game. There were a few almost touchdowns, two called back because a flag was thrown before hand and one in which the kid almost made it after a huge run only to be tackled a few yards short of the goal line.

With two minutes to go our team scored. As the clock wound down we thought we had the win when suddenly, the other team scored. The game was tied and thus forced an overtime.

Champions
Originally uploaded by Teckelcar
Our boys were up first and they were able to make a touchdown and get the extra point. Then it was the other teams turn. They came mighty close, but in the end they just couldn't get through our boys.

It was a real nail biter of a game and our team won. So we have one more week of practice and next Saturady is the big game. Then I can toss those awful white practice pants.
Posted by Sarah at 11:56 PM