Artist of the Week: Coat of Arms 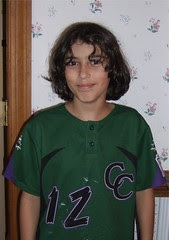 Nate so pleased
Originally uploaded by Teckelcar
This week's artist is a very pleased, and rightly so, Nate.

One of the things they have been studying this year is heraldic coats of arms. They learned about the meaning of each and every aspect, from color to what the different images mean. Nate was intrigued by the whole thing and asked if my family had one. I was able to show him not just one, but three different ones. Sometimes there is an advantage to be of UK origins.

Which of course leads us to Nate's Coat of Arms. The students were assigned the task of developing their own coat of arms using all that they have learned so far. They also had to write an essay about their design and why they chose the element they did. The assignment was due this past Monday and it was pretty much what Nate did this weekend. He had the whole thing planned out about a week ago, we just needed the time to pull it all together. 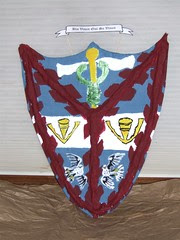 finished shield
Originally uploaded by Teckelcar
First off I'll give you what Nate wrote about his coat of arms.

My Coat of Arms

Clang! Smash! Cling! In the heat of battle, vibrantly colored shields help protect and identify knights. It was near impossible to till the difference between men in their suites of armor, so their solution was to paint something personal on their shield. They named it a Coat of Arms, which soon was used to identify royalty, and families. Soon everybody had one including some peasants, because very few people could read, plus they were fashionable. Even though there are a lot more facts about the Coat of Arms to write about the Coat of Arms I created.

My edged shaped shield incorporates the pall decision’s design on the front. The raguly heraldic lines represent difficulties I’ve encountered, like learning how to bike. I selected the color blue to represent truth and loyalty. It reflects me because I am loyal to my friends and family and I try to be truthful one hundred percent of the time. White stands for peace and sincerity. I try to be peaceful, and solve things with words. I’m also sincere about everything I say. Maroon resembles patient yet victorious in battle. I’m patient but I always get everything done that I do.

The caduceus represents balance of two items or subjects, and has a medical interest or occupation. That resembles me for I’m great at balancing two projects, and I want to be a Biological engineer when I grow up. The falcon stands for not giving up until finished. I definitely never give up, and I always finish a project even if I don’t do it on time I still get it done. A peon or spear head shows being ready for challenges. It reflects me for I usually am ready for tests and things like that.

The Coats of Arms has helped identify people and places, and has even be come fashionable proving to be very useful Doing what I did on this project has taught me a lot on the subject of Coats of Arms and I hope I’ve taught you something too. 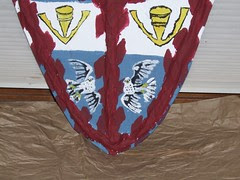 Falcon details
Originally uploaded by Teckelcar
It was a fun project to do with Nate. I pretty much just had an advisory role. I made up the paste for the paper-mâché and showed Nate how to created the ridges on his shield and he did the rest.

The hardest part was the two falcons. Nate was very nervous about how he was going to make them. We ended up finding an image of a falcon in flight and used it as a guide. You can see what I printed out for him in the picture here of the shield in progress. We found the image and I flipped it to create the two mirror images. I lightly penciled an outline on the shield to act as a guide and Nate painted the birds.

They came out fantastically well. He was extremely proud of his creations and I am too. It really is his work. After I made the rough sketch I walked away. I know I do a better job when there is nobody around and it is his project and not mine. The color selection and brush stroke patterns are his work and his work alone.