Gonna Get Medieval On Your Class

Today the gifted fifth grade classrooms had a Medieval Faire. There was a banquet, games and various information booths, created by the students, all about the middle ages. 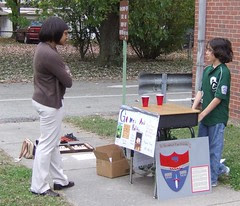 Medieval games
Originally uploaded by Teckelcar
I volunteered to cook for the banquet. Instead of my usual bakingpalooza I decided to supply a veggy dish. The teachers requested that the food have a medieval aspect to it and very helpfully provided the web site Medieval Cookery. I poked around a bit, but nothing really grabbed me. Instead, I made sweet potato and apple tzimmes.

Tzimmes is a very old and traditional dish for Rosh Hashanah and has been around in some form or another since at least medieval times. Since it was for a big crowd I ended up doubling my recipe. I didn't want to run out and I could always take the leftovers home.

Nate and a few of his friends created a game and holiday information booth. They (though really it was just Nate stuck at the table) had a few games set up like chess, backgammon, Fox and Geese, and bocce ball. He was very happy to run through his speech when he had his rare visitor. And it wasn't his fault that his booth didn't attract a whole lot of notice. Bocce ball was popular but he was competing against jousting. 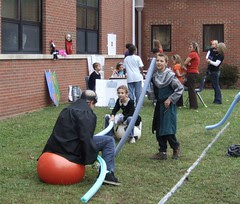 Jousting
Originally uploaded by Teckelcar
And not just any old form of jousting, but swim noodle and hoppy ball jousting. Nothing says medieval more than whacking at your classmates with a long foam tube while bouncing on a ball.

Then again what do I know.

It was, however a fun afternoon. The kids enjoyed the food, I got bring back a little less than half of my tzimmes (woo-hoo, part of dinner is done!), and I even learned a little bit about life in medieval times.
Posted by Sarah at 10:20 PM