barefoot and pregnant
Originally uploaded by Teckelcar
It was eight years ago today that we went from a family of four to a family of six.

Tonight we celebrated Max and Rebecca's arrival in the world with dinner out at the restaurant of their choosing. We all had a good time and after wards we had an ice cream cake at home. This weekend we will have their actual party, but that's enough about them now. I'll write about their birthday party next week. Instead I'm sharing with y'all a bit about way back then.

I had already been down this road before, but it was the first time carrying twins and that made all the difference.

As twin pregnancies go, mine was text book and very easy. At the end of pretty much all my appointments my OB would declare me boring and send me home. I kept myself well hydrated, which prevented the dreaded swollen ankles and pre-term labor. From the front I looked like another other pregnant women. But from the side...

I was huge. I carried them straight out in front of me. From about six months on I was endlessly amused when I was out and about from the audible reactions. At first people would ask if I was due very soon, they would gasp when I would airily reply that a still had a few couple of months to go. As my due date drew near I grew larger and larger, strangers quickly cottoned on that I was carrying twins.

During the last month of my pregnancy we had all sorts of family members stay with us to help me out. The funniest moment was when I drove my brother to the airport. He had extended his stay with us and needed to get his ticket reissued. I tagged along in case he needed any extra cash. As I waddled up to the check in desk and the strained smiles turned my way very clearly told me that they did not want me to board their planes. There was an almost audible sigh when I declared my intention was not to fly, but to help straighten out my brother's ticket. 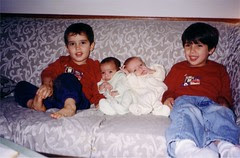 four siblings
Originally uploaded by Teckelcar
My expanding belly made things decidedly awkward for me. It was harder and harder for me to get comfortable at night. Pillows and special wedges only worked for a while. During the last week or so I ended up sleeping propped up in a comfy old arm chair in our bedroom. I was so glad that my scheduled induction was at week 36 and not 40. The last couple of weeks were agony. I mentally and physically could not go on much longer.

They were born on a Monday and my OB gave a little cheer when I showed up right on time. She thought I wasn't going to make it through the weekend. And it turned out it was a close thing indeed. I was 5 cm dilated before anything was done. Clearly Max and Rebecca were getting evicted that day.

And come they did. They both had full heads of hair, black for Rebecca and blond for Max. Ironically Rebecca had the longer hair- a punkish little hairdo. While Max, ever he good boy, had a far more conservative mop that ended neatly just above his shirt collar.

Happy birthday my littlest ones, it has been a very fun filled eight years and I wish you many more.
Posted by Sarah at 11:59 PM