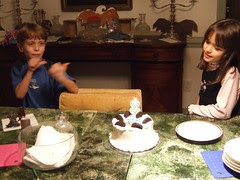 Eight and Cake
Originally uploaded by Teckelcar
Thursday was Max and Rebecca's official 8th birthday. They didn't quite get the full birthday treatment as I was just recovering from the piggy flu (and just for the record, Tamiflu totally rocks, it's the best drug ever!).

Instead of cake for breakfast they had to settle for brownies I had made earlier in the week. I did not bring in the planned sugar cookies to share with the classmates. I decided I needed to kept my germy self at home and not serve up a batch of scratch made sugar cookies with a touch of H1N1. Instead we'll make them this coming week.

Admittedly I was feeling much better on Thursday, but I was still not well enough to bake them a cake. So Larry and I stopped by a local ice cream shop and picked up a basic 6" round ice cream cake. We got lucky with our timing and the girl behind the counter was able to pipe their names on top. 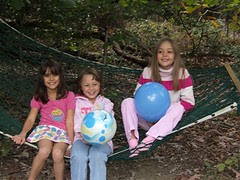 all in pink
Originally uploaded by Teckelcar
But today was a different story.

Their joint party was today.

We have gotten this twin party down to a science. Max invites a bunch of boys and Rebecca invites some girls. We tried to invite their soccer team, but between my being ill and there being no practice or games since the Friday before last we were only able to get one teammate.

For the most part the kids separate out with the boys hanging with the boys and the girls sticking together and that is the way it should be. We try to avoid double invites because I feel kind of bad when parents have to come up with presents for two kids. Mind you we do have a few exceptions. One of the boys invited rides the same bus with the dynamic duo and brought presents for both of them. 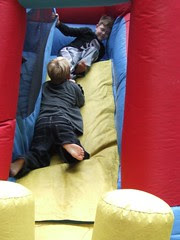 down the slide
Originally uploaded by Teckelcar
Anyhoo, we have been nervously watching the weather for the past few days. It has been cool and rainy for this week and we were hoping for just a brief respite from the rain. Today's weather wasn't perfect, but it was still pretty nice outside. I was able to fix up our bouncy tent and get it set up on the lawn.

As always it was a huge hit with our guests.

The girls did not spend much time in the bouncy tent, but that was understandable considering the how very very active the boys are. Instead they hung around indoors both downstairs and that was fine with me.

About halfway through the party, we decided to was time for our big activity, cup cake decoration. This was such a bit hit last year that we decided to bring it back this year. The kids loved getting to decide chocolate or vanilla frosting and picking out which of the sugar pieces to use. Throw in some sprinkles and you've got yourself a party.

And that is exactly what we got. In fact everyone was having so much fun, nobody wanted to go home. The hallmark of a really good party.
Posted by Sarah at 11:59 PM