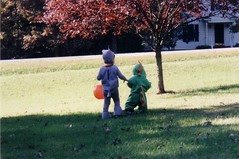 Halloween 1999
Originally uploaded by Teckelcar
I was going through some old pictures today for Nate. He had an assignment in Hebrew school about firsts: first steps, first day of school, and so on. The teacher requested that the students bring in as much memorabilia as possible, including pictures.

I was able to dig up the outfit he came home in from the hospital and the the very first hat the hospital staff placed on his head. What was particularly nice was that I had found pictures to go with a fair amount of Nate's big first time events, including his first Halloween.

He was just eleven days shy of his first birthday, but he had been walking for quite some time. We reused Jake's first costume for Nate, a cute little dinosaur/dragon. Jake, at all of four years of age, was in his rhinoceros costume. The two of them were utterly adorable together, the rhino and the dino. I have a fair number of pictures of them seated together, but this is one of my favorites, the two of them toddling off across the lawn.
Posted by Sarah at 10:39 PM