Artist of the Week: Surprise 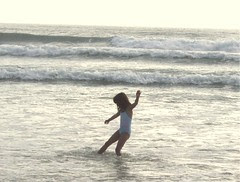 Rebecca posing cropped
Originally uploaded by Teckelcar
Rebecca is this week's artist with a little something she made last school year.

The picture of her is from our trip to the outer banks. We spent most of our time on the beach in the morning hours, which was great from a photographic stand point. I loved the lighting then, the tips of the waves would sparkle without the hard flat glare in the afternoon that washed everything out.

The pose she struck was utterly unconscious of the camera. I think I was just hitting the beach and she didn't know I was there. She is so naturally graceful as she played in the wash of the surf. Her subject matter is also something that can dance gracefully in the ocean. 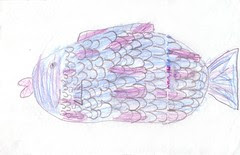 fish
Originally uploaded by Teckelcar
It is a cute little fish that reminds me of The Rainbow Fish. A book I'm positive she has been exposed to at least once in school. The colors are similar, but that might just be coincidence, pink, purple and blue are Rebecca's favorite colors.
Her fish is a bit stouter with much smaller fins, but is none the less cute.

But that's not all.

The little fish has a bit of a surprise. 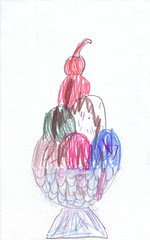 Ice cream sundae
Originally uploaded by Teckelcar
I don't know what the assignment was, but it looks like they were told to draw something on a piece of paper with an overlapping fold. After the first drawing was completed they then had to draw a second picture that incorporates part of the first after lifting the flap. Rebecca chose to make an ice cream sundae.

You can see how the tail of the fish has become the ice cream bowl. What I particularly like about the project is how well the colors work. As I already mentioned, purple and blue are among her favorites, they also work well in depicting glassware. The striations of the tail fin dovetail neatly with the base of the glassware.

Rebecca had noticed I had her picture out today and was obviously very pleased and proud of her creation. I think justifiably so.
Posted by Sarah at 11:15 PM