Playing In The Rain 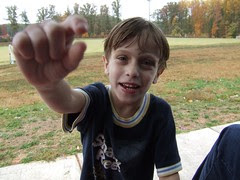 squish
Originally uploaded by Teckelcar
On Saturday we had our usual assortment of sports obligations, football for Nate and soccer for the rest. As an added bonus it was picture day for Max and Rebecca's team.

It was far warmer than last weekend, but still we had the gun metal gray skies overhead. I got Max and Rebecca fed, dressed and at the picture spot roughly on time. Well I was 10 minutes later than the coach requested, but a good 15 minutes before out actual time slot. I didn't knock myself out because I had a gut feeling that the pictures were not going to happen.

And I was right. 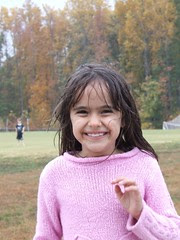 smiles in the rain
Originally uploaded by Teckelcar
Only one other child from our team was there. Over half the team was sick, including the coaches son. We hung around for a bit and one other player showed up, but it wasn't enough. The photographer told our coach that it wasn't worthwhile and that we would reschedule.

We then hung around for a bit for our scheduled game. After about 45 minutes and no real change in the number of players our coach threw in the towel. Five players are needed to be on the field and we only had four.

Jake's team had far better luck. Most of his team mates showed up and they were able to play, even though the heavens opened up with a deluge of rain. I was able to stay nice in dry by having Larry back up to the field. All I had to do was lift up the back hatch and flip over the seat- instant seat bench. Definitely one of the nicer aspects of having a minivan.

Meryl joined me in the back and we had a great time watching the game. Max, Rebecca and Nate entertained themselves by playing in the adjacent field and getting completely soaked.
Posted by Sarah at 9:50 PM