Artist of the Week: Painting 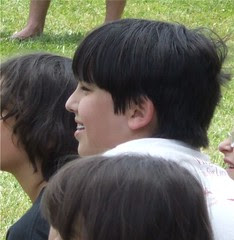 I say interestingly because a few months ago Jake pretty much announced that he was done. He didn't want to be part of this blog anymore except in the most peripheral way.

And then he started doing things, things that he was very pride of accomplishing. Grudgingly he allowed that I could still post about him. Especially when it was the very cool things he did with Future City and the Popsicle Stick Bridge Challenge.

The hard part is he is still a bit leery of the camera. I can sneak the occasional shot here and there and there are endless pictures of him striking a goofy pose. However, if I want any sort of portrait I'm pretty much out of luck. For example this picture was taken last summer unbeknown to him. 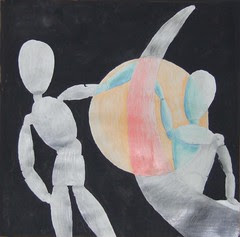 shapes
Originally uploaded by Teckelcar
Luckily his art is not so camera shy.

This is a painting he created last semester during art class. He did a very nice job, the shading really captures the three dimensionality of the modeling forms. I think it's a great painting and his teacher did as well. She thought it was his best work and that he definetely has some artistic talent.

Now I just have to get it a frame and figure out where we'll hang it.
Posted by Sarah at 11:52 PM