A Bit Under The Weather 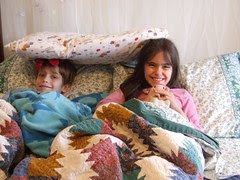 sick bed
Originally uploaded by Teckelcar
Max and Rebecca were decidedly not well on Monday. To the point that they welcomed the whole notion of seeing the doctor. So, being a very accommodating mom, I hauled them into the pediatrician.

Sore throats and a nagging cough led to strep tests for the both of of them.

It turned out in the end it was nothing more than a cold for a Max and the Little Miss has a case of bronchitis. No school for the both them, just a stern admonishment from the doctor to eat their vitamins and veggies, drink plenty of water and no playing outside. Rebecca got a script for antibotics and both are to take children's mucinex.

They still weren't up to snuff this morning, so I kept them home. Only this time things were a bit more boring. No tv and they could watch one movie after lunch.( I like to keep sick days on the boring side to prevent them from being too seductive.)

After breakfat they scampered upstairs and after a bit they called me upstairs to Rebecca's room. According to them, Max decided he wanted to take a nap with Rebecca. They decided that her bed was best and wanted me to record the cuteness.