Artist of the Week: Rug 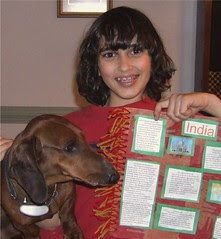 Nate and Dell
Originally uploaded by Teckelcar
In one of those rare moments I got a happy Nate willing to have his picture taken. His only requirement was that he had to be holding Dell. Easy enough to do, though Dell looks a bit unsure of the whole idea. He is a cuddly dog, but Dell's not that thrilled with being carried around.

So anyway, Nate is this week's artist and for once (!) I had an east time of procuring a decent profile picture of the said artist.

I think he was so happy and cooperative because he had just finished putting together his project. He felt very good about how it turned out and was basking in our praise of a job well done.

You can see it in his beaming little face. 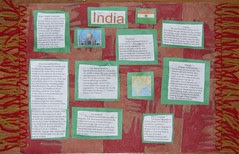 Indian Rug
Originally uploaded by Teckelcar
As for the project, it is a rug that features information about India. He did the whole thing on his own, all I did was instruct him on the right programs for the job and give him the construction paper.

The pictures really don't do the rug justice. The colors are much nicer in real life, here on the computer they look a bit muddy to me. I could have tweaked the picture a bit more for brighter colors, but then the text would disappear. In the end I usually think it's bit better to minimize the amount of tinkering with the pictures. Life is not perfect and I like my pictures to be honest.

And honestly, I do like that rug and particularly the not so little boy that made it.
Posted by Sarah at 11:53 PM