Artist of the Week: Mask 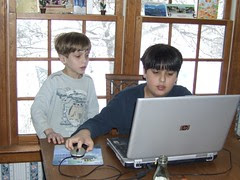 Jake and Max
Originally uploaded by Teckelcar
Jake is this week's artist since the art in question is getting shopped off to Grandma's and I wanted to snap a few photo's before it was gone.

During the first half of the school year Jake was taking an art class, I already featured a painting from that selfsame class here. He had a great time in his lone visual art class in middle school. It's a pity that the students do not get much of a chance to take art. He has had an elective, band, but that precluded anything else until 8th grade.

So this year he finally got to do something else, art for the first half and wood shop for the second. Since they are semester long courses, a great deal of artwork followed him home halfway through the school year. Most of it is leaning against the wall in the dining room. It is out of harms way and awaiting a trip to the framing store. 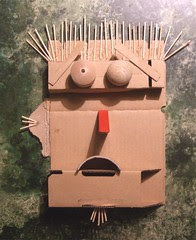 Mask
Originally uploaded by Teckelcar
Except for the mask.

As I mentioned Grandma would like to have it for her home. It really appealed to her and she pretty much knows where she is going to put it. The hard part will be getting it there.

You can tell by the shadows in the picture that the mask is not at all flat. The cardboard base has raised areas at the top and bottom. Coupled with the wooden block eyes and nose the entire thing is a bit too big to fit in a conventional box. Then, of course, the delicate nature of the whole thing adds to the awkwardness of sending the mask.

But, I think I have found a solution. I'll know by Friday evening if it all works out.

Anyway, Jake is very pleased that at least one piece of his artwork has found a good home.
Posted by Sarah at 11:51 PM