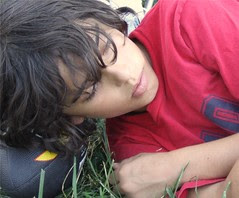 Nate
Originally uploaded by Teckelcar
For Nate has just been plain wiped out this week.

After a week of vacation it has been hard getting back into the normal rhythms of the school year. He has had late nights of homework, practice and yesterday evening a lacrosse game. The poor guy has trouble settling down at night and arising in the morning.

Today after school he was in a foul mood, lashing out at his big brother and just plain being a pill. I called him out on his behavior and stuck him in time out. When I called him over to talk he practically collapsed both emotionally and physically.

The poor thing needs his rest, but just doesn't know how to get it. I got him off to bed at an almost decent hour, so that should help. Friday will be relatively quiet as well as Sunday. Saturday will be a bit crazy with lacrosse- a game to play, team pictures and a match over in Charlottesville to attend.