Artist of the Week: Pouch 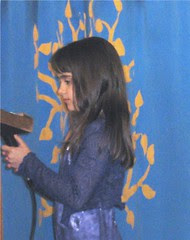 Rebecca
Originally uploaded by Teckelcar
This week's artist is the very lovely and talented Rebecca.

We were away this past weekend at a Bat Mitzvah. Larry has known the father for years and years and our two families enjoy getting together. Sadly Larry couldn't come due to all sorts of obligations, but I was able to literally fly away with Jake and Rebecca up to the NY metro area. Grandma and Grandpa picked us up at the airport and opened their home for our visit.

We had a great time seeing the sculpture garden at PepsiCo, attending the Bat Mitzvah (and accompanying party), and spending time with Nanci, Frank and cousin Evan. I know Rebecca had a great time at the party because there were a ton of girls. She really hit it off with another friend's daughter and she was not shy about joining in with the karaoke. 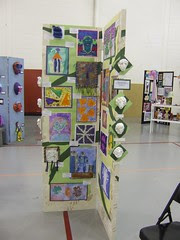 exhibit
Originally uploaded by Teckelcar
However, Rebecca did suffer some disappointments.

Namely she missed her class's pizza party and the school district's festival of arts and sciences.

Parties are fairly frequent and she was attending another in its staid, so she was able to overcome that disappointment with relative ease. But the festival was a whole other story. 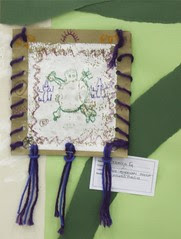 pouch
Originally uploaded by Teckelcar
It's held once a year and each school in the district has a tiny little exhibit space. The restricted area means that only a select few pieces will make the cut. The art teachers make their selections and just a few days before the festival send an invitation to those students along with the general flier that is sent to all the families. So it really is a big deal to have your child's work selected.

So of course one of Rebecca's in school art projects was selected.

She was so very, very proud and excited when she handed me the invitation. I congratulated her and was about to say how I was looking forward to the festival when I saw the dates. The festival was scheduled the same weekend we would be away. Rebecca was devastated that she would miss the show. I was only able to get her to stop sobbing when I promised her that her father would go and take plenty of pictures.

And that he did. On the right you can see her school's exhibit. It really is a tiny space. The actual artwork is on the left near the bottom. It is a type of Native American pouch, Rebecca was a bit sketchy on the details. For a cloer look you can see it here on the left. She did a very nice job on the pouches construction and fringing. The design on the pouch features a turtle and two very stylized animals. I think the drawings are very cute and she did a great job overall.
Posted by Sarah at 11:58 PM